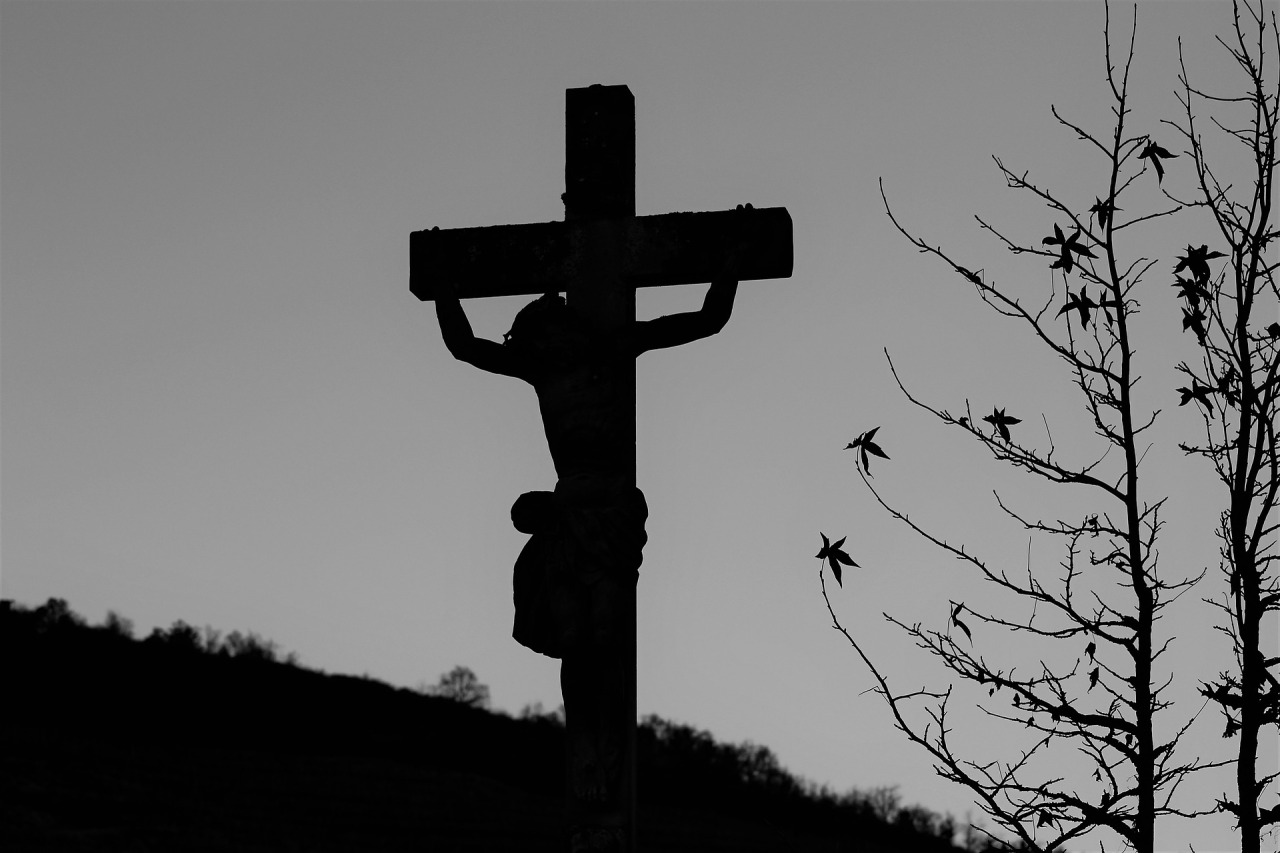 Crosses are everywhere. We find them on and in church buildings. On the covers and spines of bibles. At memorials and cemeteries. People wear them on necklaces and bracelets and even get them tattooed to their bodies. Crosses are all over the place. But what do they mean?

For something to have so thoroughly permeated the realms of architecture, decor, design, fashion, and beyond, it must be meaningful—and it is. But which meaning is it? For thousands of years there has not been only one meaning to the cross, but two.

Long before the cross was a symbol of devotion displayed in holy places, it had quite a different meaning. Before it was used for adoration it was a tool for execution. Lenny Bruce famously suggested in the 1960s, “If Jesus had been killed twenty years ago, Catholic school children would be wearing little electric chairs around their necks instead of crosses.” This may be true, but it doesn’t go nearly far enough.

As cruel and unusual as the electric chair seems to us today, it was originally designed as a humane improvement to gallows. Compared to hanging from a noose, the electric chair was more efficient and quick and less likely to fail, leaving someone alive but painfully injured. The cross was designed to do exactly the opposite.

The cross was designed to prolong the process of execution. People would often hang on them not only for hours, but days, and sometimes even weeks. Rather than bleeding to death, as we may imagine, someone on a cross was more likely to die of starvation after days hanging without food and water or of asphyxiation as their diaphragm lost strength and their body could no longer breathe. Crucifixion was a long and slow death.

The cross was not only designed to prolong the process of execution, but also to publicize it. Have you ever wondered why Jesus was crucified on a hill outside the city? It was so that all who came and went from the city would see the fate of those who crossed the Roman Empire. Quintilian, a first-century Roman educator, explained, “Whenever we crucify the guilty, the most crowded roads are chosen, where the most people can see and be moved by this fear. For penalties relate not so much to retribution as to their exemplary effect.”

That last sentence really gets to the bottom of the Roman meaning of the cross. Crucifixion was not primarily about “retribution,” but about setting an example; not so much about punishment as publicity. Crosses were set on top of hills and along major roadways like billboards to send one message: Don’t mess with Rome.

The Roman meaning of the cross is an assertion of power.

Then Jesus enters history and the meaning of the cross is forever changed. Jesus did not use the cross to assert his power, but to surrender it. Instead of hanging his enemies on a cross, Jesus died for them on a cross.

He called out to his disciples, “Whoever wants to be my disciple must deny themselves and take up their cross and follow me.” (Mark 8:34) The cross is about self-denial rather than self-assertion. It is about surrendering power rather than grasping for it. The apostle Paul would later write about Jesus saying,

He made himself nothing
by taking the very nature of a servant,
being made in human likeness.
And being found in appearance as a man,
he humbled himself
by becoming obedient to death—
even death on a cross!
(Philippians 2:7-8)

This is the fundamental Christian meaning of the cross. A symbol of service, humility, and surrender. A symbol that relinquishes reliance on ourselves and confesses utter reliance on God who delivers through pain and death to resurrection and life.

This is why it is found in places like churches and cemeteries. The cross moves us to worship God and reminds us that death does not have the last word. The cross leads us to lives oriented toward others as we serve our neighbors and love our enemies.

The Christian meaning of the cross is a surrender of power.

In addition to its place in churches and cemeteries, on bibles and necklaces, on January 6, 2021, the cross was seen amidst a crowd outside the U.S. Capitol building. Another, larger cross was erected outside a capitol building in Michigan. The crowds shouted and sang. They chanted and charged. There is no doubt that this crowd was conducting a kind of worship service. But who were they worshiping? What did their crosses mean?

Did they come in humble service to love their enemies? Did they come to relinquish their power and entrust themselves to God alone? As the hours unfolded, the meaning of their crosses was made clear. They charged into the place of political power to assert themselves rather than to serve their neighbors. They sought to punish their enemies rather than pray for them as Jesus did.

This is not Christian faith, but another incarnation of the Roman Empire. Theirs were not Christian crosses, but Roman ones with the same old message: Don’t mess with us.

This is as disturbing as it has always been. These very same crosses have been seen burning amidst the Ku Klux Klan, warped into Nazi swastikas, wielded by crusading conquistadors, paraded by Constantine’s army, and lining the roads of the ancient Roman empire. The Roman cross asserts its power at the expense of all others.

But there is good news. This is the very cross that Jesus defeated. No amount of self-asserted vitriol can exhaust the self-sacrificing love of Christ. The Roman empire fell just as Babylon did before it and all of our empires will after it. God’s is the only kingdom that will last. The Roman meaning of the cross is destined for destruction, but the Christian meaning of the cross leads to eternal life.

I will not mince words: The crowds of January 6th did not come proclaiming Christian faith. Theirs were not Christian crosses. But I will not hold back this question either:

What kind of cross will we carry in response?

4 thoughts on “Two Meanings of the Cross”